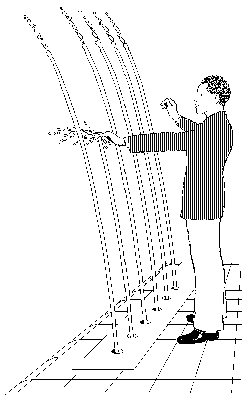 Vesiharp - making a splash in music!

The Vesiharp is something I have been working on (on and off) since 2000. It is basically a musical instrument made of water.
More specifically, it is a means of controlling a synthesiser by touching jets of water.
Less specifically, the technology used in the vesiharp could be used to control almost any electronic or electrical device - doors, lights, even other water jets.

The basic idea is that you have a fountain made of a series of parallel water jets, arcing up out of the floor. When you touch one of the water jets with your hand (or whatever body part takes your fancy) you hear a musical note. Each jet corresponds to one note, so what you have is a harp. Made of water.
Obviously it is not really intended as a concert instrument, the idea is that it would be installed in public places indoors or outdoors where people can play it, and play in it.

Here's a link to the patent.

Still waiting for me to work on some modifications so I can build a full-size prototype.

January 2011 - The US patent just reached the examination stage after many years of waiting. The examiner rejected it for some very bizarre reasons, claiming that a previously filed US patent anticipates mine, which it doesn't. In fact it so clearly doesn't that I had to wonder about the impartiality or intelligence of the examiner. Anyway I have pointed out the examiner's errors to USPTO and await their response.